The fact that Antoni Gaudí’s building, La Pedrera, gleams in the foreground through the window of this attic pavilion on Paseo de Gracia in Barcelona, seems to me, to be the perfect pretext to establish a crossed dialogue between this unique space (with no other apparent use other than the privilege of its contemplation), the landscape of the city and some objects arranged by me in the foreground.

La Pedrera and the city in the background are both seen through round-arched window at the back of a room, whose layout forces a strictly orthogonal contemplation. This grants the scene a certain classic character -somewhere between ideal and imagined- or not quite of this world, fitting well with my preference for images conceived as artifice.

An icosahedron hangs from the ceiling in the form of an inverted baldachin, whose points delimit the composition in the foreground. On the circular table, four objects: a white sphere, a small bouquet of evergreens in a glass of water, and two pieces by the Finnish designer Tapio Wirkkala.

Wirkkala’s Jahresteller plate, found in the foreground, is inspired by the groupings of inverted domes that bubbles produce on a surface; the evergreens are succulents with fractal geometry; and the Ovalis vase (also by Wirkkala) filled with stones from Altea beach, together with the round white candle, collect the light that enters through the window in the background and the opening on the side.

I have always been interested in the architecture of spaces and beautiful, simple objects, as well as the relationships that they all establish with each other. Beyond the sentimental or biographical aspect of things, I am attracted to their material essence, the contrast between the finite nature of some objects and the enduring nature of others, and particularly, when I use charcoal, the dramatising effect that light exerts on the matter of all things.

The scene strives to find harmony in only one of its many possible forms. The meaning of all this is not fully revealed, it remains open to interpretation. So let us look at it.

Every year, at the end of Spring, the sunlight begins to seep into my studio in the evenings, so I feel impelled to make a work using the effects of light and shade on its walls.

In the Spring of 2015, next to the large window, I had a bouquet with dried flowers from the day of my father’s funeral. Without any conscious intention, I included them in a charcoal, which immediately transformed into something else: something like a portrait of him in absentia, or a vanitas. The oil I painted next was a fully premeditated act to represent him through an architectural space composed of mixed elements taken from reality, imagination and memory. 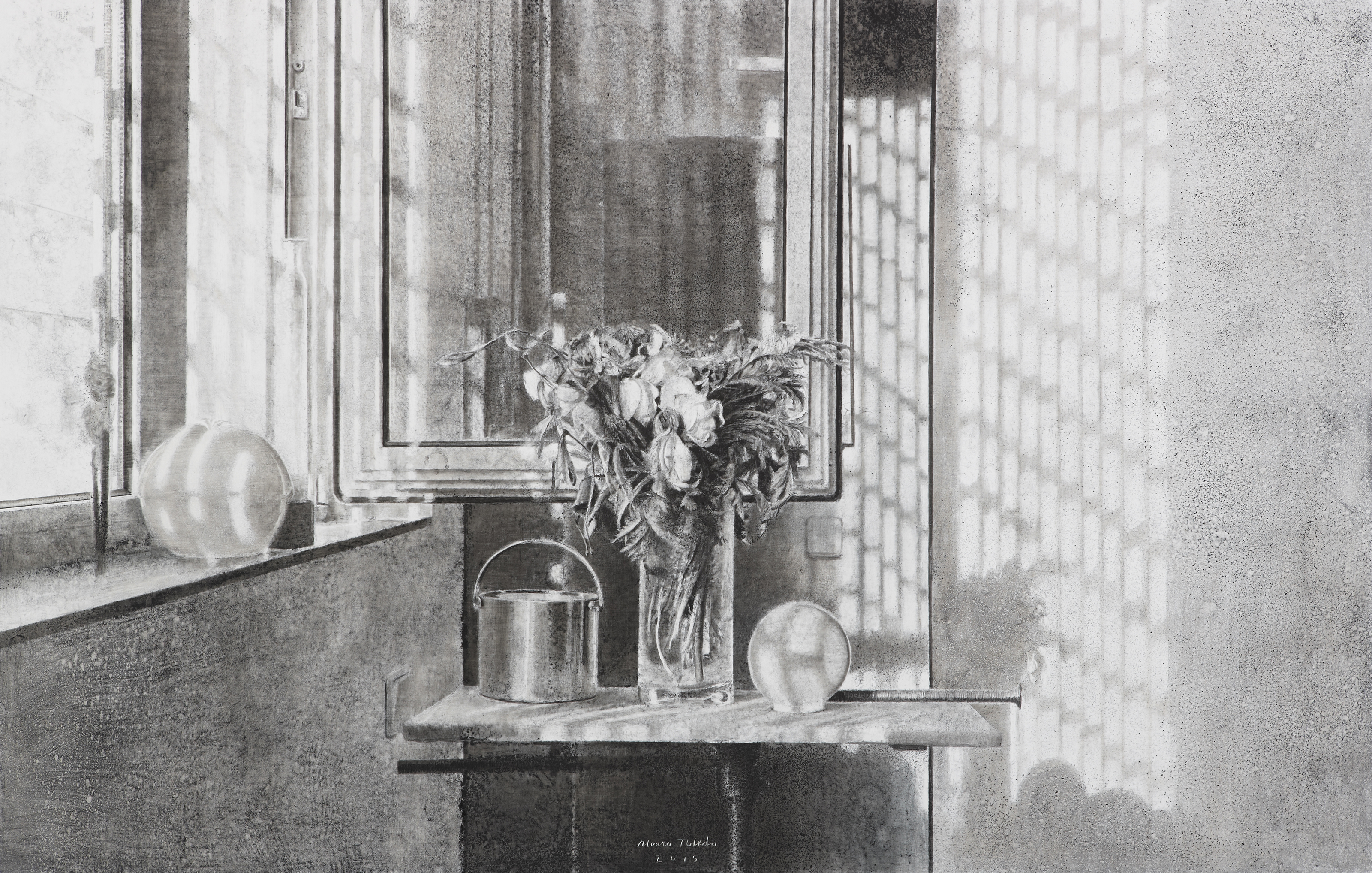 Normally a body of work is usually the result of a quiet reflection on things that are within my reach and interest me. On some few occasions, the idea suddenly arises because of a discovery of something -or someone- that catches my attention. This was the case with my fortuitous encounter with the building of the Escola Superior de Artes e Design at Caldas da Rainha, the work of Portuguese architect Vítor Figueiredo.

During a trip to Portugal, picking up my eldest daughter from an Erasmus program, I visited the building. I was struck by the stripped sobriety of that white construction rising in the middle of a pine forest, and its wide curved corridors crossed by the natural light. After visiting the building, and almost without time to think too much, since we had to leave at once, I took some pictures with my mobile phone as a note. How I would have liked to study in such a magnificent building!

Months later, I did a charcoal study. Painting, as artifice, is the result of a mental process in which reality is transformed. In this case, from the beginning, it seemed to me that the greatest difficulty lay in achieving something apparently so simple, although deep down so difficult, as defining the size of the scene within the format. In this case, the crowding effect produced by the powerful foreshortening of the curved corridor, and the lack of any element as a reference of scale, made it difficult to understand the real dimensions of the represented space. Was that a colossal place, recalling the hypostyle rooms of the Ancient World, or was it an intimate corner seen almost at ground level?

On other occasions and in other works the gaze flies freer, but in such a powerful foreshortening the vision is impelled to a path imposed by the perspective that guides the view from the background to the foreground and back to the origin, generating a tension that must be resolved in one of the two extremes.

Both in the charcoal and in the oil version, an element of still life was introduced in the first term in order to try to solve the enigma. 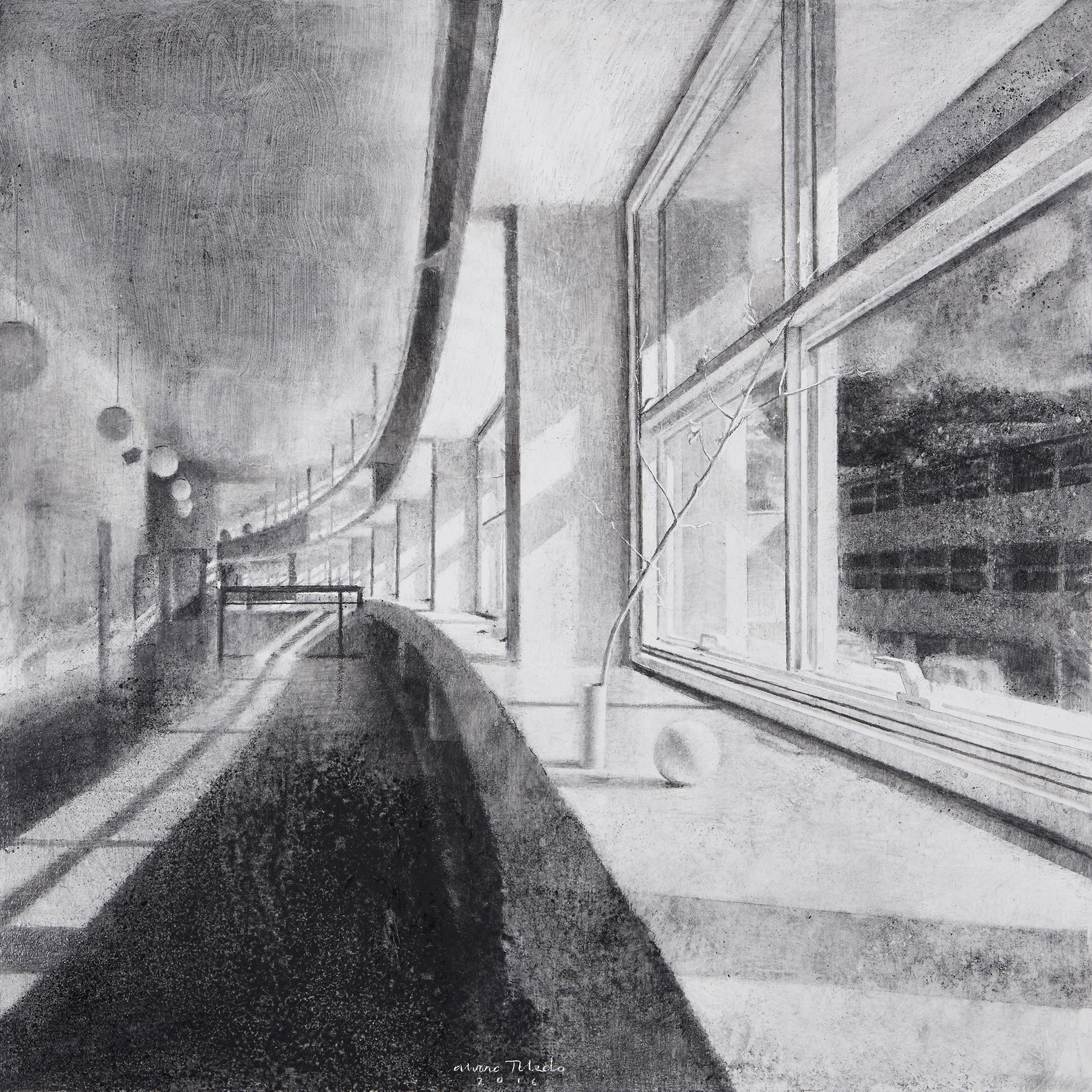 Project commissioned by the architect Esteban Becerril for a private residence. The work is an interior still life measuring 100 x 400 cm (39¼ x 157½ in), created specifically for the 70 m² (753.5 sq. ft.) space where it is located: a large living-room with a relatively low ceiling relative to its dimensions and illuminated by a skylight, a lateral opening and a large frontal window with spectacular views of a park. It is comprised by three panels: the central panel being illuminated by a spotlight which does not conflict with the lighting in the rest of the room. The two side-panels represent a more intimate opening towards nature and do not intervene in the scene’s illumination but are key to the work’s composition, lessening the tension created by such a horizontal composition.

© 2023 Álvaro Toledo. All rights reserved | © of the texts and articles: their authors

This website uses cookies to improve your experience while you navigate through the website. Out of these, the cookies that are categorized as necessary are stored on your browser as they are essential for the working of basic functionalities of the website. We also use third-party cookies that help us analyze and understand how you use this website. These cookies will be stored in your browser only with your consent. You also have the option to opt-out of these cookies. But opting out of some of these cookies may affect your browsing experience.
Necessary Always Enabled
Necessary cookies are absolutely essential for the website to function properly. This category only includes cookies that ensures basic functionalities and security features of the website. These cookies do not store any personal information.
Non-necessary
Any cookies that may not be particularly necessary for the website to function and is used specifically to collect user personal data via analytics, ads, other embedded contents are termed as non-necessary cookies. It is mandatory to procure user consent prior to running these cookies on your website.
SAVE & ACCEPT